I would like to express my thanks to you, Derick and Tasly for the wonderful support during my "second" Prostate scare.

Three years ago (2006) I was treated for Prostate Cancer and underwent 6 weeks of Chemo therapy. During this time Derick recommended Propolis and Water Lily capsules to help me through the chemo and speed up my recovery period. I felt good and after treatment I had to go for a PSA count. The medical doctor was happy with the 0.002 reading and gave me a clean bill of health. Derick recommended that I continue with the Water Lily as a maintenance, but felt good and did not continue with the Tasly medication.

I again approached Derick for help. I was placed on Ginseng RH2 Capsules. 1 Capsule 3 times per day for 3 months.

I was overjoyed when I received my following PSA check, it had dropped to 0.09. I thank the Lord for His grace and Tasly for assisting me in this time of need.

I can strongly recommend Tasly Traditional Chinese Medicines to all my friends and family.

I came to Tasly in November 2007. I was very, very sick suffering from leg problems. I couldn't even walk, had to use a car to go somewhere. My legs felt squashed and painful, sometimes I could not sleep and had to raise them to try and ease the pain. I had tried everything to help my legs but they will still sore and I felt so tired that I couldn't even pick up the broom, I could do nothing at all I couldn't even wash my clothes. Everything had to be done for me, but because of Taslys herbal products, I became a person again, and am able to do everything for myself.
"SHINE TASLY, SHINE"
I JUST WANT TO THANK THE LORD'S MERCY FOR BRINGING THE PEOPLE FROM TASLY TO CRADDOCK TO HELP ME.


I have been sick since July 2005. I had a stroke and was in bed since then. I could not wake up without help.

I have been to many doctors ever since. I also went to traditional healers, but in vain as nothing helped me. I could not stand up on my own. I have been using a wheel chair since then.

In November 2007 I heard about Tasly, I visited Derick who scanned my blood circulation and prescribed some tablets for me. I started using those tablets. Since 2005 I was not menstruating, I started to menstruate this year 2008 in January. In February I started to get up from the bed and start walking.

My aunt who is a nurse had a walking stick for her knee, she gave it to me and I start walking using it. Although I am not strong I can take some few steps with my stick.

I have used many medicines from Doctors, from the chemist they did not help, but the tablets from Tasly helped me. I am so thankful to God for them.


My name is Nicolette Durant. I am a 29 year old woman who suffered with high blood pressure. Had headaches, was always flushed in the face. The Blood Clinic would not take my blood cause my bp was too high.

About two years ago I went to TASLY with my Aunt. I has a microcircualtion test done. It shows your capillaries and how your blood moves.

Without telling Derick, he knew I had blood pressure and kidney problems.

He gave me Cerebral Granules to take for 5 days. After that I took Danshen tablets. After 10 days I felt much better, the headaches were gone, I was not flushed in the face.

The best thing was that after 10 days I went to give blood and this time was blood pressure was perfect.

Upto date my blood pressure is normal and has not gone up. Danshen has changed my life.

I was diagnosed with high blood pressure cholesterol and sugar diabetes in about 1997 the doctor that I was seeing at the time prescribed Tritace Lipitor Glycomin and some Premerin thrown in for good measure.

I took the medicines for a number of years and eventually was also put on anti inflammatory as well because my joints were getting very sore. I am talking hips knees ankles and shoulders. I went from being an active person who walked the dogs on the beach a couple of times a week and took karate twice a week to an unhappy old lady who thought that old age was getting the better of me at age 50.

A friend of mine who was tired of my complaints about the pain in my joints said that they probably came from the statin drugs for cholesterol as this was a side effect. I asked my doctor if this was the case she told me that it was possible. I then decided to go off the Lipitor and did so against the advice of my doctor.

I went to her for a full blood check up in 2006 where she again wanted to try me on statin drugs I refused. I would rather drop dead of a heart attack that live with the constant pain and upset stomach that the pain killers caused.

I was researching on the Internet and came across an article on the benefits of using fermented Chinese red yeast rice.
It appeared to be very effective in treating high cholesterol and was a natural product which would not cause side effects.

I investigated the possibilities of getting this product in East London and was directed to Tasly and to see Derick.
He used a microcirculation diagnostic machine on me and graphically showed me my diabetes high blood pressure and cholesterol.

I was given a prescription by him of Danshen Plus, Red Yeast and Bitter Melon tabs to take along with my chemical drugs.

After visiting my doctor and having confounded her with my low blood pressure and the drop in my cloistral levels I have subsequently stopped all my chemical drugs and now am only using traditional medicines and have not needed to visit a doctor for the past 2 years.

Incidentally the traditional pill glossy I have used to keep flu and cold at bay and also to stop it if I feel that it is necessary.

I am just sorry that all the people that use the drugs which stop symptoms and do damage to the other systems of the body are not able to be told of the great difference the traditional drugs make. 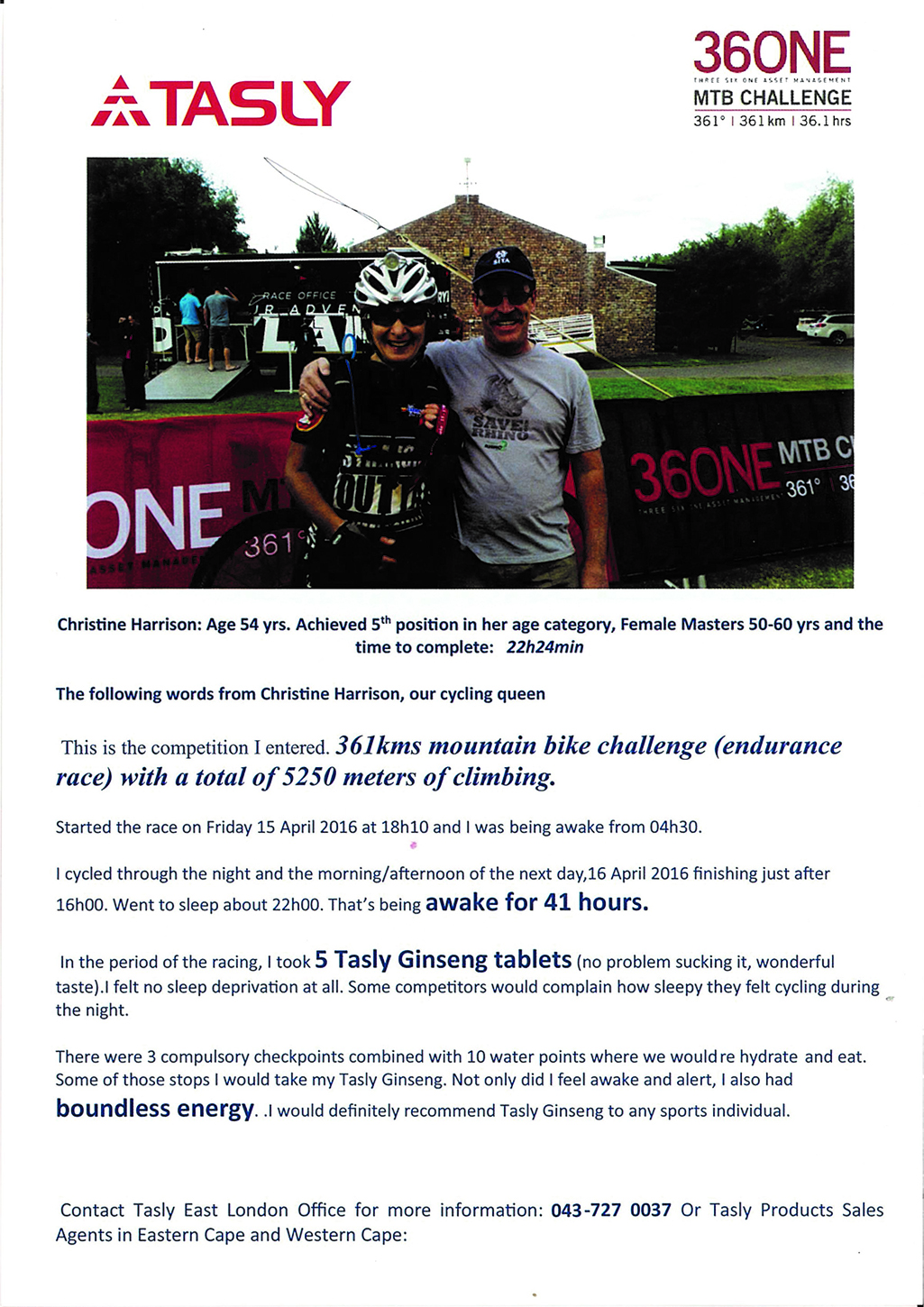 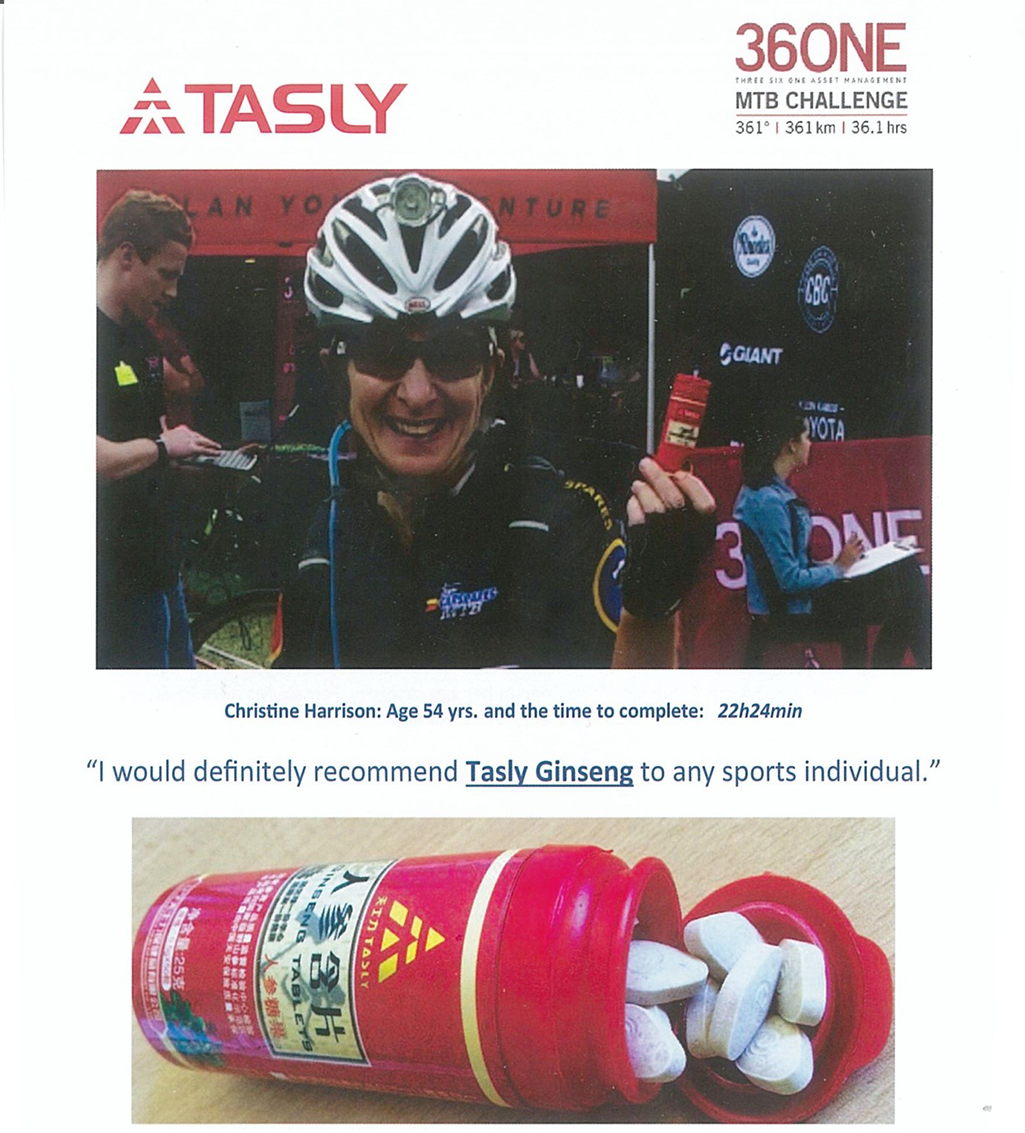 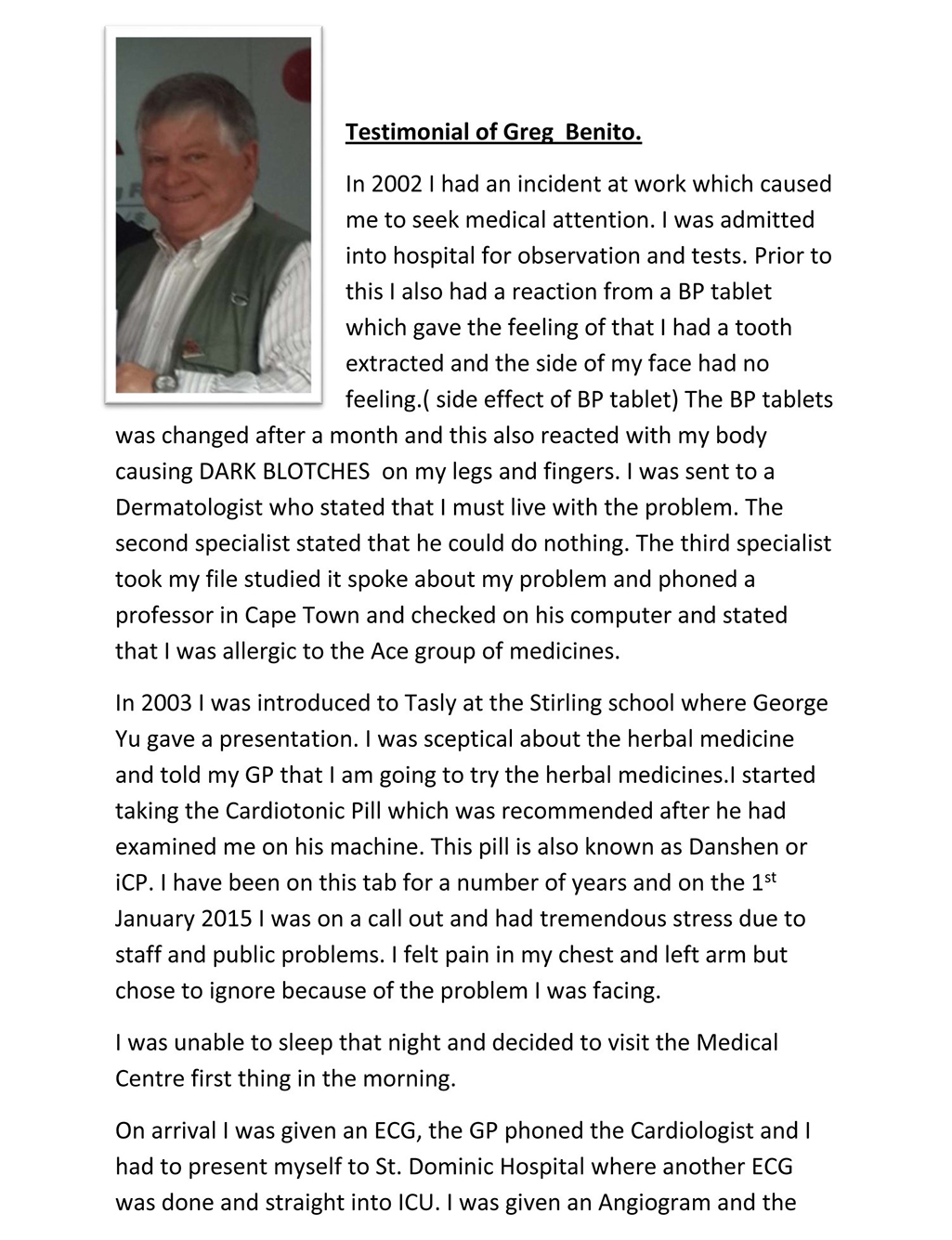 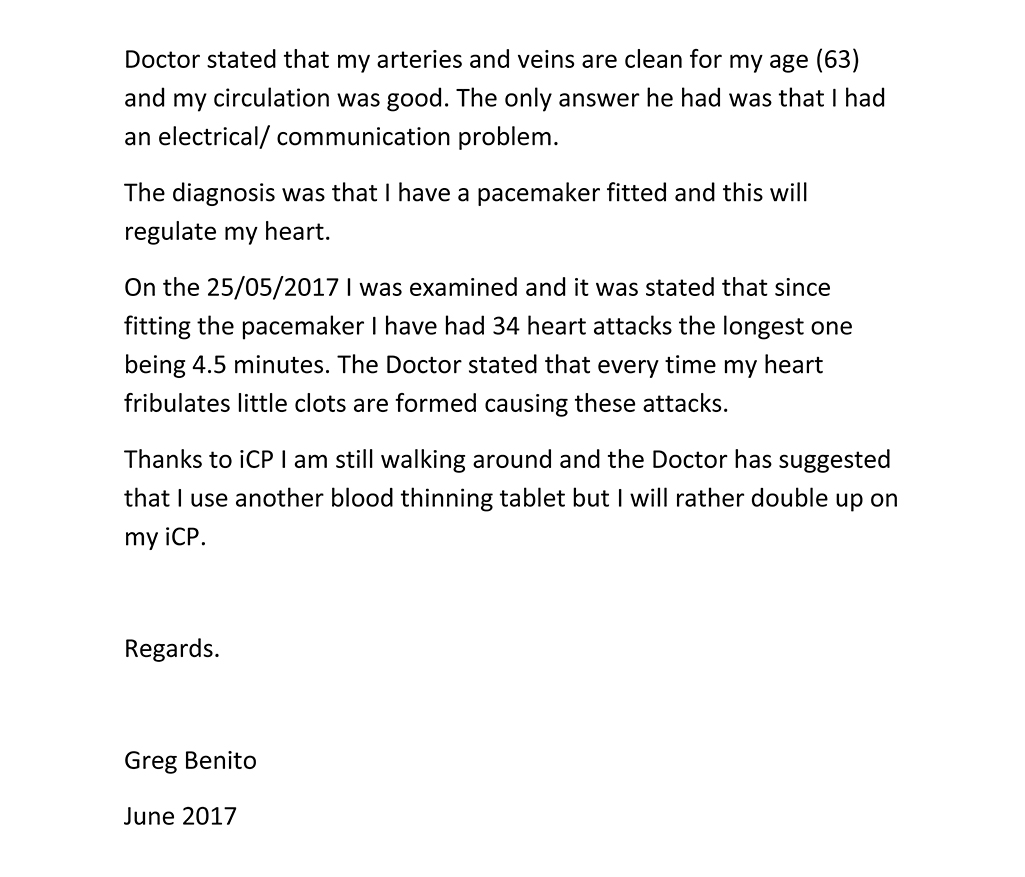 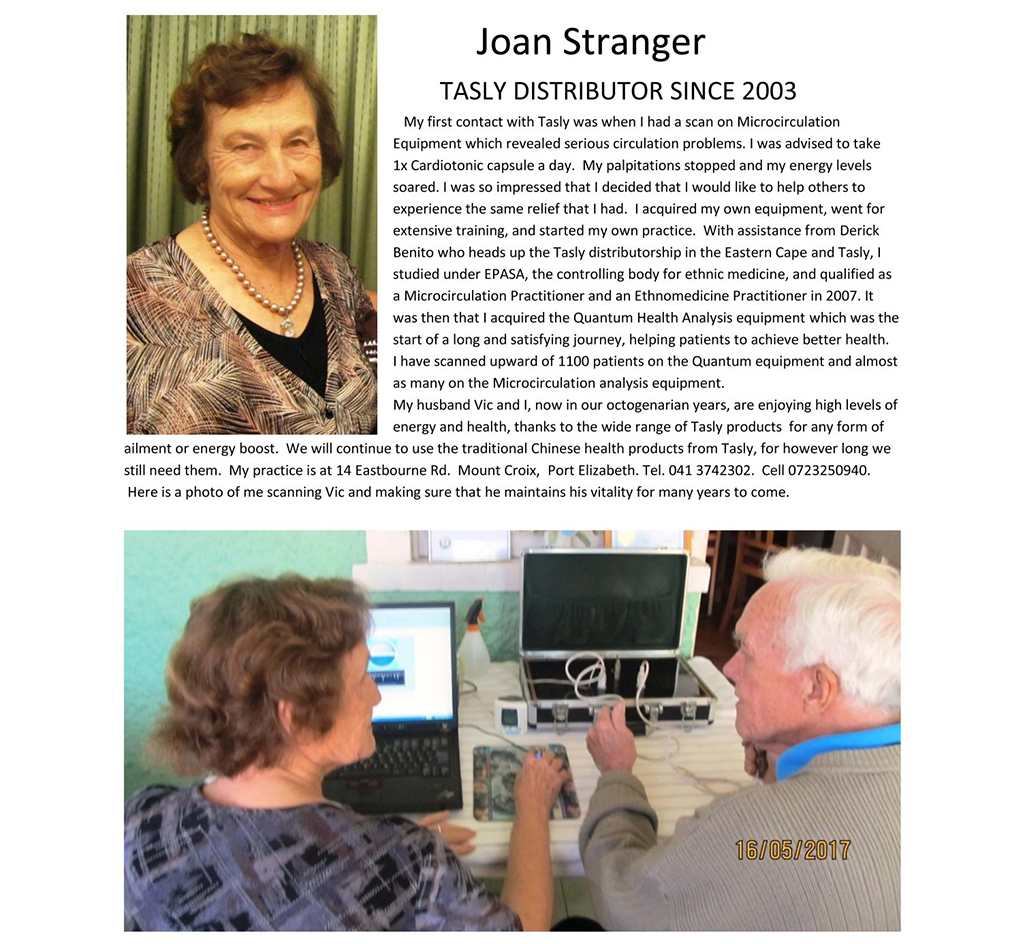 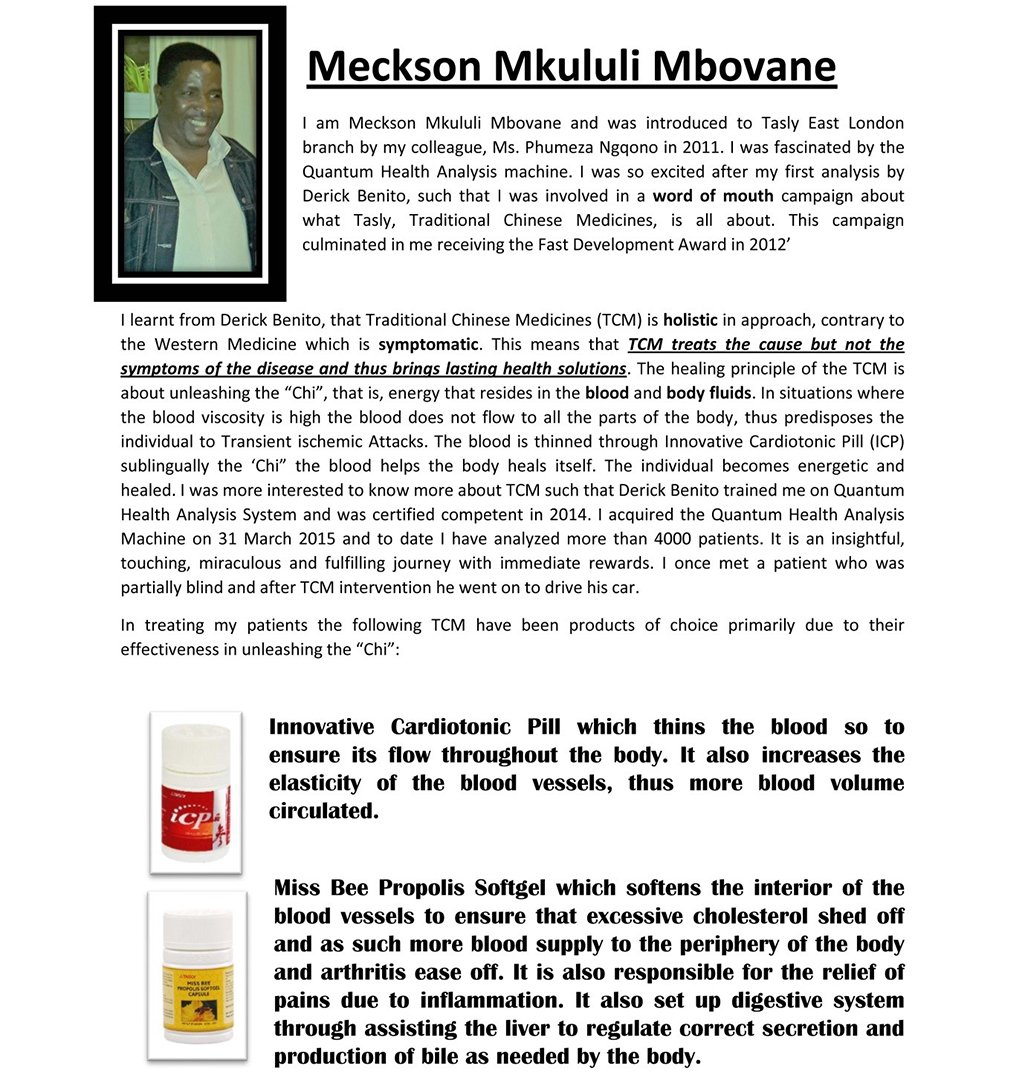 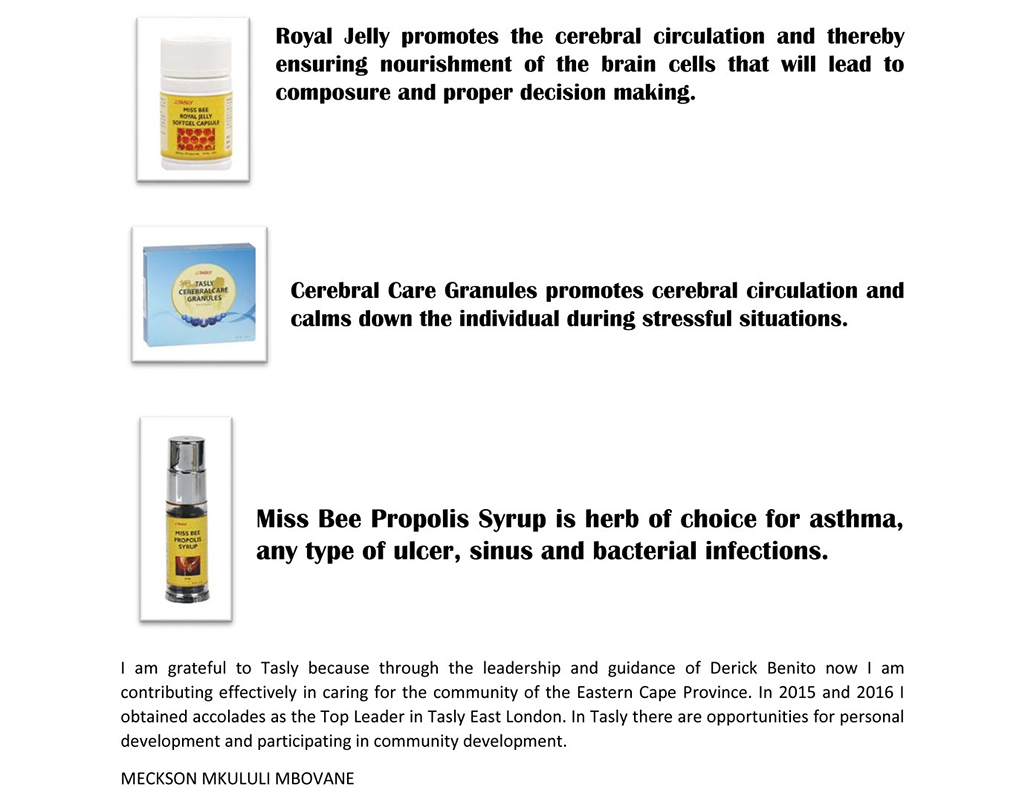 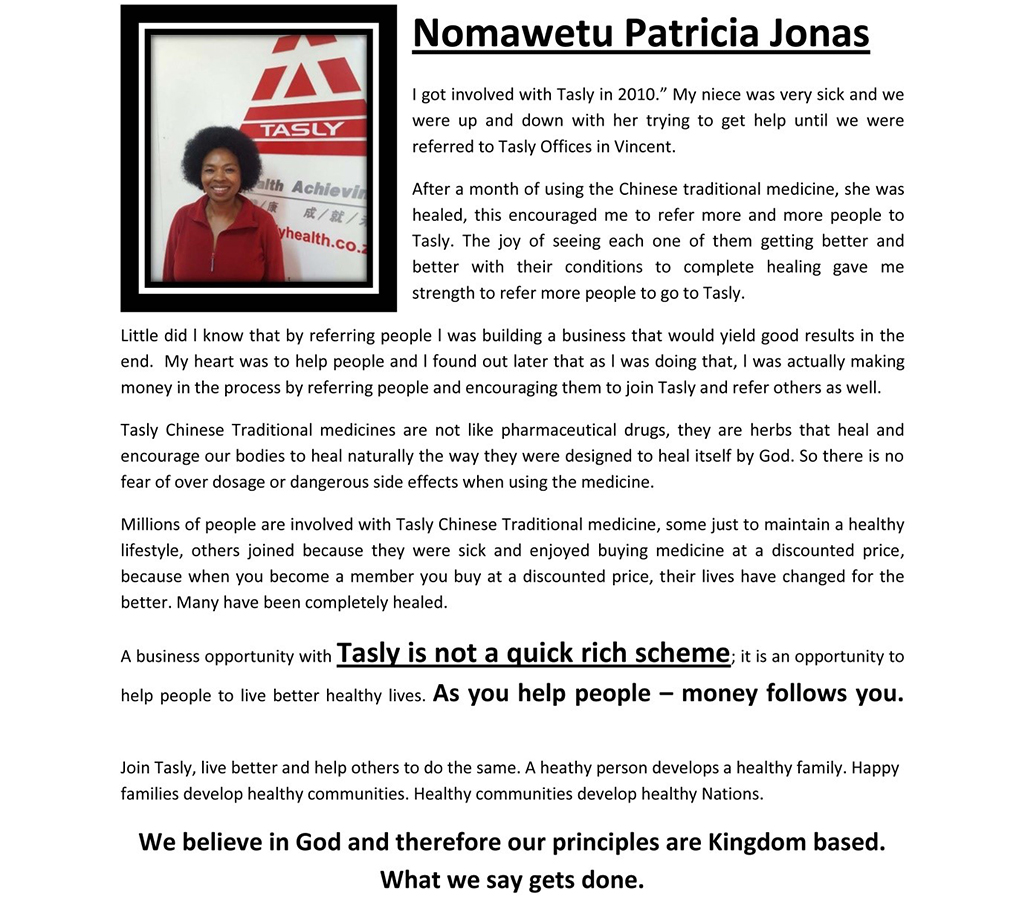 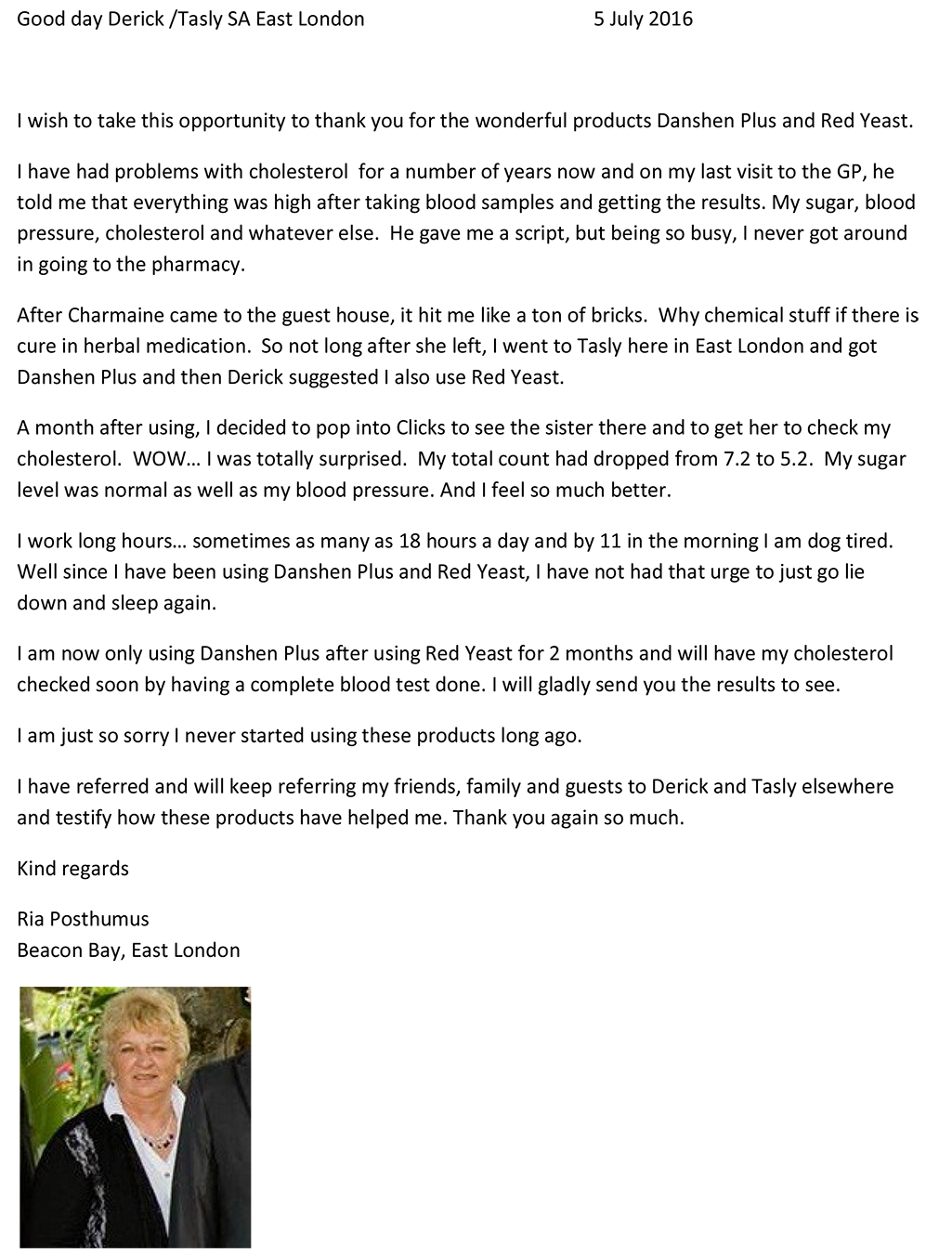